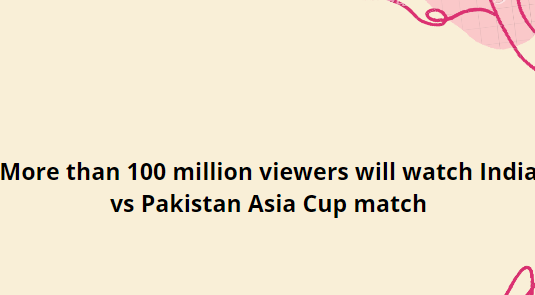 The application of India vs Pakistan Asia Cup match is not only limited to 22 yards but also business with them. A sleepless wait for this one match, a global event expected due to the bilateral series being stopped due to political reasons. So from the supporters to the organizers to the cricket fans, the waiting time is over! Venue Dubai International Cricket Stadium has a total capacity of 25000 so those who got tickets are undoubtedly lucky despite the sky-high ticket price. Those who did not get tickets will sit in front of the TV set, but what is the number?

How many people Watch This Game?

About one-fourth of the total population of the world will watch the India-Pakistan match. But the number of countries playing cricket in the world will not be more than 16. Estimates say that more than 20 crore people will watch India vs Pakistan Asia Cup T20 matches only on digital platforms. Which is the highest ever in a cricket match. The watch time of the India-Pakistan match in the 2019 ODI World Cup was 30.4 billion minutes.